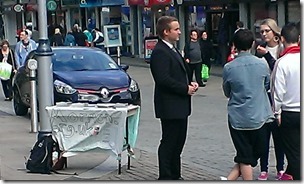 It was the first properly sunny day of the year and people were taking full advantage of fine, warm weather. In town for an art exhibition, we too had enjoyed the day, stopping for tea and cupcakes at one of our favourite watering holes with some of the family.

On our way back to the car we saw a couple of Mormon missionaries. Seeing the name they were using at their table (Mormon.org), and thinking I might get a blog post out of it, this one in fact, I took a couple of photos; the work of a moment.

But then a missionary – not in the photos – spotted me and came across and as we talked I saw my blog post take a different shape altogether.

Elder Brown: Hi, how are you today?

Mike: I’m just fine thanks, how are you?

Elder Brown: Oh, I’m real good. Have you come across the church before?

Mike: Yes, and I was intrigued by your use of the name “Mormon” at your table there. I thought you insisted on being called by your “correct” name. You even have a style guide on your web site. So why Mormon.org?

Elder Brown: I guess its because of the Book of Mormon musical. Have you heard about that?

Elder Brown: Not while I’m on my mission. Maybe I’ll get the chance later.

Mike: I have read reviews in the secular press and I understand its pretty gross, full of bad language, crude jokes and anti-Christian ideas. I’m surprised you would think to go and even more surprised your church would trade on the name of such an offensive and blasphemous work. Its the Mormon equivalent of Jerry Springer, the Opera.

Elder Brown: I don’t know about that (he honestly looked as though he had no idea how deeply offensive this show is. Well, if your church trades on it it must OK – right?).

Elder Brown: Do you know about the church?

Mike: Yes, in fact I was a member once.

Elder Brown: Oh, were you excommunicated? (If someone leaves you have to think ill of them. Its an unwritten rule. I was excommunicated but only because that’s what they did then if you left. Their policy has changed since)

Elder Brown: So why did you leave?

Mike: Because your church isn’t true, so I left and turned to the Lord Jesus for salvation. I am a Christian.

Elder Brown: So did you have a testimony?

Mike: Yes, I did have a testimony, but it wasn’t based on truth. It was just a feeling. Do you have a Book of Mormon there? (he hands me the book and I flick through to the blank pages at the back) Tell me, where are the maps?

Mike: You know, like the ones at the back of my Bible showing where these events in the book took place. I have maps showing where Abraham lived and travelled, the journey of Israel out of Egypt, the land of Canaan, the two kingdoms of Israel and Judah, the  missionary journeys of Paul, the churches of Asia Minor. Why are there no maps at the back of your book?

Elder Brown: I don’t know about that.

Mike: Maybe because the book is fiction and the people, places and events never existed, or happened? Its like Lord of the Rings. Have you ever read that?

Elder Brown: Yes, I have.

Mike: The Lord of the Rings has maps but we know those people, places and events aren’t real. They are the product of a clever and fertile imagination. Its a story that can stir our emotions, lift our minds to higher things, make us aspire to greater courage, duty, loyalty and sacrifice; we can have a testimony of it. But it isn’t a true story, just something to make us feel good.

You have no maps in your book, no locations, culture or artefacts from those people, times and events. No reason to believe any of this is based in the real world other than the feeling you get when you think about it. The Bible tells of people, events, places and things to which history can clearly testify. Isn’t this significant?

Elder Brown: Umm, I’ll have to think about that. So do you think we are not Christians?

Mike: Now, isn’t it interesting that, from the outset of our conversation, you have inquired about my attitude to and involvement in “the church.” You speak as though it was the only one, yet your church wants to identify closely with other churches these days. I wonder why that is?

I met a Christian lady this week, a stranger handing out Christian leaflets, and told her I was already a Christian. She didn’t ask which church I attended, we simply praised God together that we had each met another Christian on the street. Its wonderful when people who know the Lord meet for the first time. From the outset we have so much in common, but you immediately distinguish between members and non-members.

Salvation isn’t in membership in an organisation but in Jesus. Yet here you are, claiming to be Christian, but advertising at your table a fictional character named Mormon and not Jesus. There is no salvation in Mormonism and that is why I left your church and turned to Jesus.

With that we parted company but I hope as he flicks through his Book of Mormon and finds those empty pages at the back, or maybe through his Bible and finds maps, he will stop and reflect. Or maybe when he meets another Christian he might wonder why they don’t just talk together about Jesus.

You can’t always stand and talk for ages. There isn’t always a satisfying conclusion. Its always good to leave people with something to think about, something that will jump up in front of them every time they open the book or tell the story. I hope and pray he thinks about the maps. I pray he remembers our conversation when next he meets a Christian. I hope he thinks, “I’ve heard this before, so often, I ought to look into it.”

Closer to Jesus a step at a time.