This morning at 9.00 am the best and wisest man I ever knew departed this world and entered glory. He was a friend, a brother in Christ, a mentor and I miss him more than I can say.

Please pray for his wife Noemi, his family, his church family, close friends and the countless folk to whom he ministered and who will mourn his passing.

Doug Harris founded Reachout Trust in 1982, initially as an outreach to Jehovah’s Witnesses but it quickly grew as a ministry to the cults, the occult and New Age movements.

Doug’s work, of course, involved so much more. He had been a church elder since 1963 and for the past five and a half years was a key member of the team at Revelation TV. He and his wife, Noemi, had only last year moved to Spain as the TV operation moved its main office and studio over there. I am sure Revelation TV will soon publish its own account of Doug’s work with them but it has been every bit as substantial as anything he did with Reachout Trust.

Doug was instrumental in guiding our transition from Mormonism to Christianity, allowing Ann and I to “purge” old and unhelpful ideas by talking about our journey in seminars, and by writing on the subject for Reachout. We learned from him the value of grace, the importance of patience and the skills involved in sharing our story in a way that challenged Mormon teaching while loving the Mormon to whom we were witnessing.

We worked together for over twenty years he as chairman and Ann and I as trustees of Reachout. We shared platforms, developed the ministry, wrote and published together.and lead in twenty or so Reachout Conventions. They were great times, challenging times and he will be missed more than words can say.

About thirteen years ago I suggested I interview him for a short history of Reachout that was eventually published in booklet form. In 2005 this was updated and is still the most recent account of an exceptional work started and driven by an exceptional Christian man of vision and grace. I reproduce it in part here:

The Story So Far

It is sobering to reflect that the day you stepped out with some tracts and a handful of friends you started something that would grow to national proportions. Reachout Trust began in 1982 as a local outreach to Jehovah's Witnesses. From a single initiative, by a handful of people, at a Witness convention in Twickenham the Trust has grown to become a nation wide ministry to those in the cults, the occult and the New Age movement.

Over the years we have taken on responsibilities, met needs, and developed in ways that were never envisaged in those early days. No one sat down and said, "why don’t we see if we can achieve this?" The ministry can truly be said to have evolved until, today, we are one of the foremost Christian groups in our field.

The first newsletter was produced in 1984, was four pages long and photocopied, and had a run of a few hundred. Today's newsletter is sixteen pages and growing and goes out to several thousand individuals and churches across the country. It is our main organ of communication and seeks to keep people informed and equipped for what they face on their doorstep or high street. 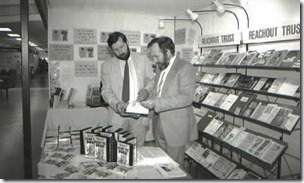 The first Reachout convention was held in New Malden Baptist Church in 1984. After that it moved to Kingstanding Elim Church until 1991 when we held it at the Wycliffe Centre at High Wycombe. Having outgrown that venue we moved in 1996 to the Pioneer Centre near Wolverhampton. From a handful of 'interested' people at that first meeting we have grown to over a hundred attending a full weekend of seminars every November.

2004 saw a landmark 20th Convention and proved successful with seminars on Developing the Ministry, Defining “Salvation”, True Christian Communion and the need to be a peculiar people. In 2005 we found ourselves moving back - or is that forward? - to the significantly expanded Wycliffe Centre and it has been a little like coming home.

Seminars and workshops typically cover all the main cults including, of course, Mormons and Jehovah's Witnesses, but also other groups such as the Children of God, Freemasonry, Moonies etc. We also provide instruction in dealing with the occult and the New Age and have included counselling workshops and teaching on deliverance.

A landmark in the growth of Reachout was the introduction, in 1988, of the Action Pack. This has been a special blessing over the years and has contributed significantly to meeting our financial needs. Especially gratifying has been the fact that it gives us the opportunity to give something practical to those who give to us. This partnership scheme means that the giver is entitled to receive regularly free or discounted Reachout resources from books to videos to regular publications.

Ours is a ministry of discernment and apologetics and our primary role is 'truth-telling'. However, we have developed beyond simply publishing and distributing information. One area in which we have been particularly successful and effective is in recruiting people, many from cult backgrounds themselves, to represent Reachout 'on the ground', to be Reachout in their location.

Our system of having Associates is unique in this ministry in the UK and is a major contributory factor in our growth and success. These people who represent Reachout in their locality are a help to the local church and a first point of contact for those seeking the help Reachout provides. Through their different talents and experiences Associates are able to provide training for the local church, specialised insights into the world of the cults, and sympathetic support for those seeking freedom and truth.

Our spiritual forebears fought hard for the
eternal truths cherished by today’s believers.
Similarly, tomorrow’s believers will inherit
what we contend earnestly for today

Where possible our Associates are encouraged to work closely together in their regions under a regional leader who co-ordinates their efforts and is responsible for training etc. Praying together, sharing problems and ideas, and encouraging one another builds strength, encourages commitment and makes Reachout a real local resource.

Reachout continues to evolve and we face new challenges almost daily. Managing and training a growing number of people, and maintaining and enhancing the reputation of Reachout in an increasingly demanding ministry, means finding new, more efficient ways forward. In these challenging times we seek to define more clearly what we do and how we do it. To help in this work a 'ministry team' is being developed to look at all aspects of the ministry, from literature to training to how we should respond to developments in the constantly changing world of the cults.

2004 saw the publication of Should Christians Apologise, a book that shows every Christian that apologetics is something we all need to learn, and that equips every Christian to begin that process of learning and gaining in confidence in their witnessing. The Reasoned Defence series of booklets begin to address some of the key issues Christians might meet and have proved a handy reference tool.

We also re-published Audrey Harper’s testimony book Dance With the Devil, a harrowing account of one person’s experiences in the occult. It has been controversial and we have had our critics but we feel it is important that people like Audrey have the opportunity to tell their story, and important that others hear them.

We also continue to find popular Doug Harris’s Jehovah’s Witnesses, Their Beliefs and Practices as well as, Mormonism, a Gold-Plated Religion, the definitive British books on these groups. A full catalogue is available from Head Office.

Always be prepared to give an answer to everyone
who asks you to give the reason for the hope you
have. But do this with gentleness and respect.
1 PETER 3:15 (NIV)

Reachout Trust has a good relationship with the media and undertakes a number of media interviews each year, being called on by researchers for a wide range of subjects. Representatives appear regularly on news items, 'chat shows' and documentaries covering all areas in the cults, occult and new age.

When stories, such as the first 'approved' Satanist in the Navy are reported on, many newspapers and TV programmes request information and interviews. These do not always bring direct responses to Reachout Trust, although it does make us known. It also enable a 'Christian' perspective to be placed on the items of news people are talking about. This is a demanding avenue of work and we would welcome the help of people who feel they would like to join us to work in this area.

We are sometimes referred to as a para-church organisation. As an organisation, of course, that is what we are. Reachout is not a church, but neither are we separate from, or in addition to the Christian community. We are Christians first and foremost who see our role in the body as that of watchmen. The way we fulfil that role is in organisations like Reachout, just as those called to mission form missionary societies.

People who escape the cults need a new spiritual home. God's provision for all new Christians is the church. Members of Reachout Trust are members of the local church and Reachout always seeks to work closely with local church leaders. From the beginning it has been very important to have a network of church contacts across the country.

As people have come to Reachout for help we have in turn sought to 'plant' them in an appropriate fellowship. Reachout is often simply a first point of contact leading to more appropriate ministry within the church and even professional help in a counselling setting.

There is an urgent need for Christians to be equipped to meet the challenges of the modern world. People are needed to act as comforters to the hurt and wounded, bringers of fresh hope to the disillusioned, friends to the betrayed and truth-tellers to the deceived.

Churches need to act as communities of refuge where there is shelter and safety for the vulnerable, life and hope for the lost, and sound teaching and gentle discipling for the many who need correcting and direction.

Reachout Trust seeks to provide that equipping through a training programme designed to teach individuals and churches. Through seminars and workshops we bring to the Christian community specialist knowledge, gained from first-hand experience, that will arm Christians for the battle for truth that rages in our society

By means of newsletters, fact sheets, books, audio and video- tapes, as well as the internet, we share our knowledge and understanding and keep the church informed of up-to-the-minute developments in the ministry.

We are, then, those who in Christian love, often having experienced ourselves life in a cult, wish to come alongside, advise, pray with and otherwise help cult members and their families and friends.

As far as our experience and knowledge takes us, as God leads, we help and minister. 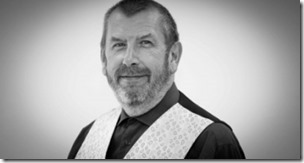