Is Mormonism ditching Prophets? A look at the 2013 edition of the LDS Scriptures 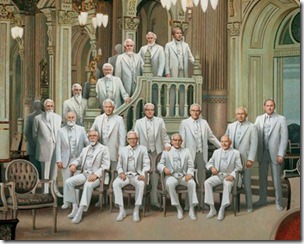 Is the Mormon Church turning from “living prophets” to academia to gain traction in the 21st century? Are Mormons turning to prophets for homiletic inspiration and academics for professional credibility in the 24/7 internet world? Does the Mormon message of prophets mean anything anymore?

The unique claim of Mormons is that they are led by “living prophets.” Prophets are integral to their claim to be a “Restoration” church, prophets are what distinguish Mormonism and prophets are foundational to their claim to, alone in this world, have authority to speak and act for God. It is understood, historically, that when a Mormon scholar speaks on Mormon issues, no matter how illustrious his or her career, how impressive their curriculum vitae, it is still “only their opinion,” albeit a professional opinion. Prophets alone make doctrine.

The Strange World of Mormon Prophets

However, Mormon prophets have come up with pretty wacky ideas and practices. The list is long: Polyamory, polygamy, polyandry, banking scandals, institutional racism, the Mountain Meadows Massacre. The exposure of the much vaunted Book of Abraham - “written by [Abraham’s] own hand” according to Joseph Smith - as an Egyptian Book of Breathings circa 50BC to 50AD. The infamous forgery scandals that hoodwinked Gordon B Hinckley and led to the tragic Salt Lake City bombings of 1985.

Mormon prophets have increasingly proved a liability and it has been the church’s practice to bury their dead prophets’ ideas along with them. Mormons are used to explaining away the embarrassing statements and practices of past leaders, from the sexually predacious Joseph Smith and the monomaniacal Brigham Young, through the rabid dogmatism of Bruce R McConkie, the bogus claims of Paul H Dunn and his “Early Life and War Experiences,” to the inability of Gordon B Hinckley to stay away from TV cameras, opening his mouth only to change feet.

I want to point out two developments I consider significant in this regard with the publication of their 2013 edition of the Mormon scriptures. Mormon prophets are so wrong as to be a liability and Mormons now admit it, and the Mormon Church is looking to academics to do what, in a more innocent time, prophets once did.

On June 8, 1978 a statement was issued from church headquarters declaring the long standing ban on men of African descent holding the Mormon priesthood lifted. This statement is found in all subsequent editions of the Doctrine and Covenants (D&C), along with the earlier declaration of 1890 abandoning, officially, the practice of polygamy.

What is effectively a colour bar has been a thorn in the side of the Mormon Church and stood for most of that church’s history. Historically, it has been founded on Mormon Scripture and teaching. Generations of Mormon leaders have developed and at length taught the reasons for the bar to black priesthood holders.

In the 2013 edition of the D&C, to the original declaration has been appended a preface purporting to explain the background to this development:

The Book of Mormon teaches that “all are alike unto God,” including “black and white, bond and free, male and female” (2 Nephi 26:33). Throughout the history of the Church, people of every race and ethnicity in many countries have been baptized and have lived as faithful members of the Church. During Joseph Smith’s lifetime, a few black male members of the Church were ordained to the priesthood. Early in its history, Church leaders stopped conferring the priesthood on black males of African descent. Church records offer no clear insights into the origins of this practice. Church leaders believed that a revelation from God was needed to alter this practice and prayerfully sought guidance. The revelation came to Church President Spencer W. Kimball and was affirmed to other Church leaders in the Salt Lake Temple on June 1, 1978. The revelation removed all restrictions with regard to race that once applied to the priesthood.

Gone is the, the elaborate story of war in heaven, less noble pre-mortals, the curse of a black skin, talk of the negro being a descendent of Cain and a representative of Satan on the earth, key elements of the Plan of Salvation. Worse, gone is the confidence in prophets as the church openly “admits” it has no idea why this teaching held sway for almost 150 years of its 180 year history. Where once any Aaronic priesthood holder (age 12-17) might have explained it now even prophets cannot.

This is nonsense, of course, and they know and understand full well the elaborate theological arguments for the bar. As you scan the faces of Mormon General Authorities on the stand at conference time you are looking at men who grew up being taught and went on to teach the Mormon mythology regarding ignoble premortal lives, the consequent “curse” of black skin and its resulting proscriptions. This is a public relations exercise designed to distance today’s church from its own history, rather like Nazi’s burning documents when it became clear the war wasn’t going their way.

What is significant is the unqualified admission that prophets at the head of God’s only true church cannot understand or explain Mormon doctrine. Further, Mormon Church history, which has always been in the hands of a fastidiously “record-keeping” Mormonism, can shed no light on the matter. It comes to something when feigning such ignorance is better than owning your own church’s history and teaching.

Mormons, it seems, cannot look to their prophets, nor can they rely on their own historical records to help them understand their own church and doctrine. Where, then, are they to look for guidance? If not to prophets, past or present, where are Mormons to look for revelation? That’s the next post.

This is also guest posted on Mormonism Investigated