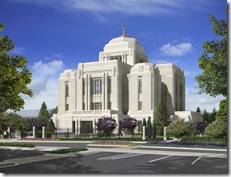 It surprises people to find the many and remarkable similarities between Mormonism and Islam.

Both start with an angel and a book; both were founded by a “prophet” of the last days; both founders it is said uneducated; both claim to be “the only true religion”; both teach and practice polygamy; both are fiercely patriarchal; both have complicated laws, including dietary restrictions – the list goes on.

Now the artist’s impression of the proposed temple for Meridian, Idaho,instead of the usual steeple or spire, has Moroni standing atop a dome that looks strikingly like the dome of a mosque. What would a Mormon muezzin recite to call the faithful to prayer? “There is only one God with whom we have to do, and Joseph is his prophet?”

News reaches us that The University of Utah prominently depicts Mohammed in the rotunda of the Park Building. Given sensibilities surrounding depictions of the prophet it seems the University has apparently removed the prophet’s name that was displayed prominently under his image.

Fred Esplin, a University spokesman, explained; “Eventually the decision was made to cover the name of Muhammad that appeared beneath the image,” Esplin said. “The image remains, but it is not identified as Muhammad. The viewer can interpret the figure as they wish.”

You can read more in the Daily Utah Chronicle.

May 20th, 2010 was declared Everybody Draw Muhammed Day in protest against the violent reaction among Muslims to the publication of satirical pictures of the prophet. The idea came from US cartoonist Molly Norris and is based on the idea that if enough people draw pictures of Muhammad, Islamic terrorists would not be able to murder them all, and threats to do so would become unrealistic.

Personally, I don’t believe being realistic is high on the agenda of these people but I am willing to be proved wrong. Anyway, the Mormons won’t be joining in but then they have a track record on violent censorship so I am not surprised.

Eric Johnson of Mormonism Research Ministry (MRM) has written a great book Joseph Smith and Muhammad. You can find it in the MRM Store.

Meanwhile, I don’t know who that fellow is in the picture but he looked interesting so I just thought I would put him there to see if you might interpret him as interesting too.