I have had the privilege occassionaly of guest posting on Bobby Gilpin’s blog Mormonism Investigated We are currently covering the Saturday afternoon session of the recent Mormon General Conference. The blog is well worth following and Bobby has marshalled a small band of us to comment on conference twice a year as well as on the major Mormon study books for the year – Teachings of the Presidents of the Church - this year’s being Lorenzo Snow.

This is my latest contribution: 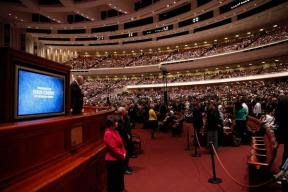 I have picked out for comment some themes I see running through the Saturday afternoon session of the Mormon conference. The theme of families increasingly causes problems for them and I touch on the changes made in their new edition of the Scriptures, a subject I will be covering in more detail soon. Particularly interesting are the “dry” statistical reports which, if you know what to look for, can be very enlightening, not so much for what they say as for what they don’t say.

In May my church will hold its AGM where the financial accounts will be made available to members. We do this because the church is the people, not the building or the institution, and church leaders are servants of the people, the church, to whom we are accountable.

The Saturday afternoon session began with the sustaining of church officers and a report from Robert W Cantwell, Managing Director of the Church Audit Report:

“Based upon audits performed, the Church Auditing Department is of the opinion that, in all material respects, contributions received, expenditures made, and assets of the Church have been recorded and administered in accordance with appropriate accounting practices, approved budgets, and Church policies and procedures.”

While UK law requires limited companies to submit accounts to companies house for public scrutiny no such legal requirement is made in US law. Businessweek produced an interesting study on the subject in July 2012. The Mormon corporation, therefore, is accountable neither to the the public from whom it derives tax benefits nor to its own members whose money they collect and use. By comparison a telling state of affairs… Continue Reading