Mormons are very formal, some might say old-fashioned in their attempts to “keep the Sabbath.” Especially in the chapel area, what some Christians call the Sanctuary, men are encouraged to dress formally, women to wear dresses or skirts. American missionaries have the task of preparing people for their first visit to a Mormon Sunday meeting and will tell women they shouldn’t wear pants in the chapel.

Where I come from pants means underwear, as in underpants, what others call briefs, or panties. What Americans mean by “pants” we call trousers. Now imagine the reaction of a middle-aged married woman being informed that she should not wear her underwear in the chapel.

December 16th, 2012 was declared “Wear Pants to Church Day,” good news for those chilly women here in the UK who misunderstood the traditional instructions and went to church commando. There was a Facebook page to fuel this campaign to bring equality for women in the Mormon Church, but the original had to be taken down because of death threats. 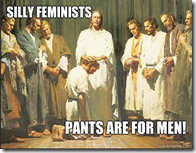 Some Mormon women were turned away from their ward buildings, it has been reported, while others were invited to interviews with their bishops. One report said that, “despite the death threats, and the informal social pressures, some brave Mormon women went to Twitter to tweet pictures of their mild mannered defiance: #PantsToChurch.

Some posted pictures on the Feminist Mormon Housewives blog. There was for many a lot of soul searching, for others fear of what people would say. Some Mormon men wore purple, the traditional colour of suffragettes, as an act of solidarity.

But the people my heart goes to, and the reason I feel this movement should succeed, is those poor young men sent on mission to the United Kingdom only to find themselves having to tell middle-aged married women that Mormon women go commando in the chapel.