In May 1844 Joseph Smith declared that he was establishing a kingdom “that will revolutionise the whole world.” (History of the Church, p.365) John Taylor, third president of the Mormon Church stated in 1865, “We do believe it and honestly acknowledge that this is that kingdom which the Lord has commenced to establish upon the earth, and that will not only govern all people in a religious capacity, but also in a political capacity” (Journal of Discourses, vol. 11, p.53) And in 1859 Heber C Kimball, another Mormon leader, said, “And so the nations will bow to this kingdom, sooner or later, and all hell cannot help it” (Journal of Discourses, vol.7, p.170)

In March 1844, shortly before he died, Joseph Smith set up a secret organisation, the Council of Fifty. This council was charged with developing a one-world government based on a modified version of the American Constitution. The council, made up of unelected members and based along Masonic lines, was meant to become the highest court on earth, superior to any already established constitution or government. These Mormon machinations were a closely guarded secret and even today any records of those early council meetings and deliberations are unavailable for study. The existence and purpose of this secret council became known and writs were issued against seven members, “prominent citizens of Nauvoo”, for “treasonable designs against the state.”

“The scriptures indicated that Christ would rule as king over the kingdom of God. Smith took this idea quite literally and thought it only logical that he, as predecessor of the Saviour, should enjoy certain prerogatives of royalty. Consequently, shortly before his death, the prophet apparently had himself ordained as king of the earth” (Klaus Hanson, master’s thesis, quoted in the UTLM publication, Mormonism, Shadow or Reality?)

In 1844 this council decided to run Joseph Smith for the presidency of the United States as a step in establishing the Mormon kingdom, “If we succeed in making a majority of the voters converts to our faith, and elected Joseph president, in such an event the dominion of the kingdom would be forever established in the United States...” (June 1855 letter by George Miller, quoted by Hyrum Andrus in, Joseph Smith and World Government, from Tanner, Shadow or Reality?)

To summarise, Joseph Smith set up a secret council to govern as a one-world government, had himself ordained to be king of the earth and ran for the presidency. His successors, Brigham Young and John Taylor, were also ordained to be king in their turn. The story of this hubristic episode in Mormon history is truly fascinating and goes a long way to explaining the imperious attitude often seen in Mormons as they take their message around the world. You can find out more about this on the Utah Lighthouse Ministry web site where I obtained much of this information on early Mormonism.

Of course, by the end of June 1844, Joseph Smith had been killed by a mob in a furious gunfight and Mormon dreams of the presidency and eventual world domination were crushed by a substantial serving of reality. By February 1846 Brigham Young was leading the Mormons in a disastrous trek west to finally settle beyond the reach and borders of the United States in the Great Salt Lake Valley. There they established a different kind of kingdom, just as secretive and despotic, but much reduced in its reach and influence from the original vision.

Nevertheless, into modern times Mormons have entertained the idea that one day “men’s hearts will fail them”, governments will tumble and the Mormon Church with its priesthood organisation and reputation for strong self-government will be called upon to save America and the world, bringing order out of chaos. When we look at the Mormon organisation today it is well to remember that this is how Mormons see themselves. They have a self-image that reflects those early vainglorious ambitions and that belies the real state and strength of the Mormon Church today.

It is this that allows successive Mormon presidents to stand in the two general conferences every year and declare, “The Church has grown steadily since that day in 1830. It continues to change the lives of more and more people every year and to spread across the earth as our missionary force seeks out those who are searching for the truth”* while the fact is the Mormon Church has struggled to grow for some years and is described by some as “flat lining”. (*Thomas S Monson, April 2010 General Conference)

We have looked at Mormon demographics before. Here I want to look at the true geographical extent of the Mormon kingdom. It is still centred in Salt Lake City, Utah, which has a Mormon population of some 1.88 million in a total state population of 2.8 million according to 2009 stats. Utah is incontrovertibly a Mormon state and Mormonism is very much an American religion in that the great majority of Mormons today live in the Americas and the most significant concentration of Mormons is in the American Rocky MountainWest. The map on the right from the Pew Forum on Religion and Public Life illustrates the extent of the Mormon kingdom. 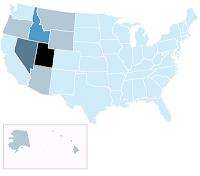 Interestingly, New York State, the birthplace of Mormonism, has a trifling Mormon population of 76,811, less than 2% of the population and probably nearer 0%.

Outside these parameters Mormonism is all but invisible in terms of significant and established communities around the world. At 180,000 for instance the Mormon population of the UK is just 0.24% of the general population. In the rest of the world Mormonism doesn’t even fair as well as this. The Mormon Church outside the Mormon kingdom is truly an outpost of empire. While other churches and denominations can boast strong cultural relevance and identity across borders and traditions Mormonism is American to the core and is a stranger wherever else it goes in the world.

The strength of Mormonism in the United States, and especially in Utah is such that critics and commentators living at the heart of the Mormon kingdom sometimes talk about operating  “behind the Zion curtain.” But what of the great majority of people who, if they encounter Mormons at all, meet them beyond the Zion curtain? What will they be met with and is the Christian who lives outside the Mormon kingdom to approach his/her witnessing differently? That is what I want to address next time when we “Meet the Mormons.”
Email Post
Labels: Brigham Young Joseph Smith Latter-day Saints Mormon Authority Mormon Demographics Mormon History Mormon Kingdom Mormon Prophets Mormons