A very important issue when you talk about Mormonism is the question of orthodoxy. What is a Mormon and what do Mormons believe? While Mormons would have you believe that Mormon doctrine and practice are fundamentally constant, experience shows that Mormonism changes with time and because of pressures from both inside and outside the church. It might be said that each generation creates Mormonism in its own image and swears that this is the true faith passed down from Joseph Smith. But while familiar discussions revolve around charges of doctrinal changes and contradictions being met in turn with denials, and counter charges of misrepresentation a new phenomenon is emerging that challenges both Mormonism and its critics.

Third Wave Mormonism, Middle Way Mormonism, New Order Mormonism, call it what you will, it seems to represent a new generation of believers who see plenty wrong with the Mormon Church but, instead of looking to leave they create Mormonism in their own image, reforming it for personal use. Mormonism is becoming for some very much a “personal” faith perhaps best described by the term “Cafeteria Mormonism”. It is a fascinating phenomenon and is explained quite well here. It is a key issue and addresses the question of what is “authentic” Mormonism. How do we recognise this phenomenon and how should we answer it when we meet it?

Cafeteria Mormonism is clearly identified in the recent and growing opposition of many Mormons to the official Mormon support of Proposition 8 in California. As a result many Mormons have gone on to question the official Mormon Proclamation on the Family, attracted by the idea of alternative lifestyles. Less obviously a Mormon might talk excitedly about grace and quote many Bible texts a Christian might quote, sounding like a Christian in the wrong church. Usually we might argue that they were using Christian terms but giving them Mormon meanings. But the Cafeteria Mormon might as easily select a bit of Christian grace to compliment his selection from the Mormon trolley.

I find myself returning to the same point I always come back to and that is the message Mormonism offers the world “officially” through its missionary programme. One correspondent describes how he learned to reject the “expectations of continuity, predictability, certainty, and a safe religious experience” in favour of “a whole new wild and changing religion full of possibilities and potential”. You can see the attraction but the irony is that the Missionary Discussions criticise the Christian Church for being wild, changing and full of potential and call it “apostasy” and characterise the Mormon Church as “restoring” a “consistency, certainty, continuity and safe religious experience.” 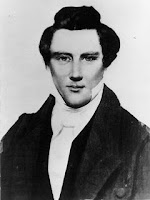 Joseph Smith has provided some inspiration for Cafeteria Mormonism and it is no surprise when you consider that today Joseph Smith would make a very bad Mormon. Any Cafeteria Mormon will find something in Smith to justify their choices. He was a unique character who thought Mormon thoughts for the first time and much of what he said and did was experimental and unfixed and much changed and developed very quickly as Mormonism grew. An example is his view of God, which was almost Trinitarian although ultimately Modalistic in the BOM and which developed into the polytheism of the Book of Abraham (ch.4) and the King Follett Discourse, a view from which some Mormons today are distancing themselves. In another he saw his role as simply producing the BOM but then changed D&C 5:4 (originally Book of Commandments 4:2) to accommodate further ideas he had such as producing his own Bible.

He was a monogamist who became a polygamist, a mystic who became a general, an opportunist who became a city mayor and leader of a new religion. He gave the Word of Wisdom “not by commandment or constraint” (D&C 98) and never once felt constrained to keep it. He wrote clearly in the BOM of dark skin being a curse and spoke of the curse of Cain passing through Ham and denying his descendants the priesthood (Book of Abraham 1) and yet he ordained a Negro. Yes there is much in Smith to comfort those who seek a more fluid and flexible Mormonism.

Is this view “officially” taught and endorsed by the apostles and prophets of the Mormon Church? Do the prophets on whom the mantle of Smith has fallen and through whom alone Mormons are taught to find restored truth smile on Cafeteria Mormonism? Does the Mormon Church still offer the consistency and continuity it claims to restore and that it finds woefully lacking in the Christian Churches or is Mormonism becoming as experimental and tentative as it once accused Christianity of being? Is Mormonism in its popular form becoming itself apostate? Such a thought is richly ironic given that Mormon missionaries are still bringing the world a message of Christian apostasy and Mormon restoration.

Cafeteria Mormons dismiss the Mormonism of their parents as one great mistake but I find myself impatient with the characterising of the authoritarian Mormonism of the not too distant past as “McConkie Mormonism”. It cannot possibly be ascribed to one man or one generation and nullifies the “anointed” leadership of the prophets of previous generations. If Mormons are finally facing up to the failings of their church, its history and leaders they should be honest and face their own errors and stop vilifying critics as “anti-Mormons” who do little more than mischievously mine for quotes.

I am reminded of the old saying that people in glass houses shouldn’t throw stones. Mormonism has been increasingly transparent to the outside world. Its traditional criticism of “Christendom” (which has been vitriolic at times) is increasingly implausible as Mormons themselves deny and/or explain away polygamy, racism, polytheism, contradictions and failed prophecies as misrepresented or the product of a dynamic religion.

I certainly don’t expect Mormonism to be perfectly consistent but Mormonism expects it and promises it. That is the claim of the “restoration” and if some Mormons are saying that it is no longer the case then surely someone ought to tell the prophet? More than that, the prophet ought to tell Mormons so they can relax and look at their religion realistically for the first time, maybe even have a good laugh. That is all critics really want and if we can start the Christian/Mormon discussion again with Mormons understanding that they are allowed to be wrong and change their minds and without pretending it’s the same old church then surely we will begin to get somewhere.
Email Post
Labels: Cafeteria Mormonism Mormons New Order Mormons What is a Mormon?