“Religious historian Jan Shipps says if a prophet is defined as one who speaks for God, then Mormon founder Joseph Smith could have been one.
He could also be everything else it's suggested he may have been, including a magician, Shipps said in an address sponsored by Sunstone Magazine at the Salt Lake City Public Library Tuesday, Nov. 17.” 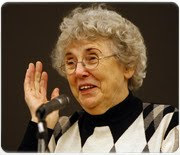 Jan Shipps is an historian whose application to Mormon history has made her popular in Mormon circles for decades, so much so that she is sometimes referred to as the Mormon den mother. Her public address, sponsored by Sunstone magazine, is exciting for Mormons but a good write up in the Mormon Times is especially pleasing because Shipps is, after all, an historian and brings a degree of subjectivity to her writing.

In a paper on Makers of Christian Theology in America she writes of Joseph Smith:

“From the time they arrived in New York through the 1820s, Joseph, Jr. worked with his father and brothers in the fields. They also worked together in other capacities. Since Joseph Smith, Sr. had enough interest in the occult to give the family a reputation for scrying, this could well have been a decisive factor in what happened during the younger Joseph's teen-age years. Indeed, it seems entirely likely that the father encouraged his namesake in the use of a "seer stone," a sort of psychic geiger counter which helped him locate lost objects. In addition, surviving historical sources provide hints that the elder Joseph Smith was not displeased when his son's success as an adept led to his being employed in a search for buried treasure. On at least one occasion, the son was engaged as the leader of a company that dug (unsuccessfully, as it turned out) for gold which the company's organizer believed had been buried in the region by its earlier residents.”

When Fawn Brodie, a historian of high repute from another generation, wrote the same in her definitive history of Smith, No Man Knows My History, she received excoriating criticism from the Mormon authorities and was excommunicated. But Jan Shipps is different. Where Brodie was a Mormon who failed to toe the party line Shipps is a non-Mormon who has some nice things to say about Mormons notwithstanding. Brodie was a “heretic” and the niece of a prophet, David O McKay, while Shipps is a friend of the church because she is a non-Mormon who takes Mormonism seriously.

Its all about understanding the subtext. If its Mormon it has to be orthodox, if its not milk it for what you can get, or call it anti-Mormon and dismiss it.